Make Your Workout Greener at These Chicago Gyms and Studios

Resolved to boost your fitness — and shrink your ecological footprint? Do both at these spots. 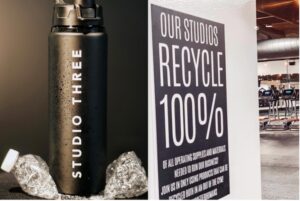 At boutique fitness studio SWEAT Chicago, you won’t find a single paper towel or antibacterial wipe. Weights, mats, and other equipment are sanitized with washable, microfiber cloths and natural cleaners from Method and Meyer’s. When classes aren’t in session, Nest thermostats moderate the climate control and timers switch off lights.

It might feel a little less plush on the tush, but “it literally gets the job done,” Rahn says. And it’s worth it to reduce the environmental impact of his businesses, something he’s made a priority since opening his first gym in 2012.

Between its Lincoln Park (2401 N. Halsted St.) and River North (648 N. Clark St.) locations, Studio Three sold more than 20,000 plastic water bottles in 2019 alone. Looking from the cooler of refreshments to the bin of empties left president and CEO David Blitz and his team feeling “a bit embarrassed,” he says.

So this year, they’ve banned sales of single-use bottles, and offered the first 200 clients of 2020 a high-end, reusable vessel. They were gone within two hours — but if you forget yours, you can still buy a new one, or even borrow a loaner.

Blitz says Studio Three also recently recycled more than 400 pounds of metal from bikes and other equipment, has a paperless communication system with members, and is investigating solar-powered equipment and movement-sensor lighting, among other green measures. “The nature of fitness is self-improvement, discipline, and greater awareness,” Blitz says. “It wasn’t a huge leap to better apply those same themes to our club operations.”

SWEAT doesn’t sell single-use water bottles either, nor do Row House, Club Pilates, YogaSix, Pure Barre, StretchLab, or spinning studio CycleBar, all of which have multiple Chicagoland locations. The Barre Code, where you can tremble through ballet-based workouts at city and suburban spots, offers Boxed Water instead of bottles — and is currently collaborating with the company on a campaign that plants trees in exchange for social-media posts.

At West Loop’s Brooklyn Boulders (100 S. Morgan St.), hungry climbers can toss their energy-bar wrappers into special recycling boxes and in the spring, sign up for workshops that turn old rope into rugs and other crafts. And if they leave their own gear behind, it’s put to good use — donated to conservation and outdoor access non-profit Red River Gorge Climbers’ Coalition.

Big-box gyms are also stepping up. Life Time, which has 10 Chicago-area locations, has boosted its energy efficiency by an average of 15 percent since 2010, through LED lighting and other efforts. Low-flow showerheads have already saved the chain 108 million gallons of water, and each stall is stocked with all-natural, paraben-free Soapbox products.

Such efforts — and the marketing surrounding them — attract clientele already mindful of their own impact on the earth, Rahn says. For those who aren’t, though, facility owners hope green moves encourage changes during the 23 hours of the day people aren’t working out.

“It’s actually quite easy to find behaviors to improve upon or habits to drop,” Blitz says, whether that’s cutting back on disposable coffee cups, turning off the water when brushing your teeth, or unplugging your phone charger when not in use. “Every little bit helps.”